Aqua (EOS PM-1) is a multi-national NASA scientific research satellite in orbit around the Earth, studying the precipitation, evaporation, and cycling of water. It is the second major component of the Earth Observing System (EOS) preceded by Terra (launched 1999) and followed by Aura (launched 2004).

The name "Aqua" comes from the Latin word for water. The satellite was launched from Vandenberg Air Force Base on May 4, 2002, aboard a Delta II rocket. Aqua is on a Sun-synchronous orbit. It flies as the second in the satellite formation called the "A Train" with several other satellites (Aura, CALIPSO, CloudSat, OCO-2, the French PARASOL, and the Japanese GCOM W1).

Aqua carries six instruments for studies of water on the Earth's surface and in the atmosphere: 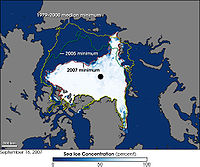 This article is a stub. You can help National Aeronautics and Space Administration Wiki by expanding it.

Retrieved from "https://nasa.fandom.com/wiki/Aqua_(satellite)?oldid=22261"
Community content is available under CC-BY-SA unless otherwise noted.