The Caves of Mars Project was an early 2000s program funded through Phase II[Clarification needed] by the NASA Institute for Advanced Concepts[1][2] to assess the best place to situate the research and habitation modules that a human mission to Mars would require.[3] The final report was in mid 2004.[3]

Caves and other underground structures, including lava tubes, canyon overhangs, and other Martian cavities would be potentially useful for manned missions, for they would provide considerable shielding from both the elements and intense solar radiation that a Mars mission would expose astronauts to. They might also offer access to minerals, gases, ices, and any subterranean life that the crew of such a mission would probably be searching for.[3]

The program also studied designs for inflatable modules and other such structures that would aid the astronauts to build a livable environment for humans and earth creatures.[3]

Discussion of how best to seal caves to provide breathable atmosphere with air locks.[3]

The project showed crickets and mice could breathe argon mixtures for extended periods without apparent problems.[3]

The project produced many educational materials.[3] 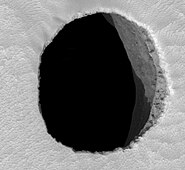 HiRISE image of a 180 m wide lava tube skylight on the southeast flank of Pavonis Mons. 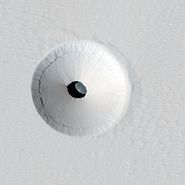 HiRISE image of a 35 m wide lava tube skylight surrounded by a collapse pit on Pavonis Mons.
Add a photo to this gallery

Retrieved from "https://nasa.fandom.com/wiki/Caves_of_Mars_Project?oldid=17714"
Community content is available under CC-BY-SA unless otherwise noted.