The Kennedy Space Center Visitor Complex is the visitor center at NASA's Kennedy Space Center in Florida. It features exhibits and displays, historic spacecraft and memorabilia, shows, two IMAX theaters, a range of bus tours of the spaceport, and the Shuttle Launch Experience, a simulated ride into space. It also encompasses the separate Apollo/Saturn V Center and United States Astronaut Hall of Fame. There were 1.5 million visitors in 2009 and it had some 700 employees.[1]

The complex had its beginning in the 1960s in a small trailer containing simple displays on card tables. By 1964, more than 250,000 self-guided car tours, permitted between 1 and 4 p.m. ET on Sundays at the urging of U.S. Rep. Olin Teague of Texas, were seen at KSC. In 1965, KSC Director Kurt H. Debus was authorized to spend $2 million on a full-scale visitors center. Spaceport USA, as it was soon titled, hosted 500,000 visitors in 1967, its first year, and one million by 1969. Even during the gap between the Apollo and Space Shuttle programs, attendance remained at over one million guests and it ranked as the fifth most popular tourist attraction in Florida.[2]

When nearby Walt Disney World opened in 1971, visitors center attendance increased by 30 percent, but the public was often disappointed by the comparative lack of polish at KSC's tourist facilities. Existing displays were largely made up of trade show exhibits donated by NASA contractors. Later that year, a $2.3 million upgrade of the visitor complex was begun with added focus on the benefits of space exploration along with the existing focus on human space exploration.[2]

Included in the base admission is tour-bus transportation to an observation platform at Launch Complex 39, which provides unobstructed views of both launch pads and the surrounding KSC property, and the Apollo/Saturn V Center. It also includes admission to the Astronaut Hall of Fame, 6 miles (Template:Convert/round km) to the west.

The Apollo/Saturn V Center, located 6 miles (Template:Convert/round km) north, is a large museum built around its centerpiece exhibit, a restored Saturn V launch vehicle, and features other space related exhibits, including an Apollo capsule. Two theaters allow the visitor to relive parts of the Apollo program. One simulates the environment inside an Apollo firing room during an Apollo launch, and another simulates the Apollo 11 Moon landing. The tour formerly included the Space Station Processing Facility (SSPF) where modules for the International Space Station were tested.

The Visitor Complex includes two facilities run by the Astronauts Memorial Foundation. The most visible of these is the Space Mirror Memorial, also known as the Astronaut Memorial, a huge black granite mirror through-engraved with the names of all astronauts who died in the line of duty. Elsewhere on the Visitor Complex grounds is the foundation's Center for Space Education, which includes a resource center for teachers, among other facilities; and the Kurt Debus Conference Center.

The Early Space Exploration houses several displays of artifacts, among them is the Gemini 9A spacecraft; as well as a recreation of the Mercury Control Center using consoles and furniture relocated from the original building at Cape Canaveral Air Force Station. These were previously housed in the Mercury Mission Control facility, which was on the National Register of Historic Places, but it was demolished in May 2010 due to concerns about asbestos and the estimated $5-million cost to renovate the building after 40 years of exposure to salt air.[5]

US Astronaut Hall of FameEdit

The rocket garden between the building which houses the Visitor Complex entrance and the Debus centre is an outdoor display of historic rockets that put Americans and satellites in space. Visitors can walk up to and around the base of the rockets. The Mercury-Redstone,Mercury-Atlas, and Titan II rockets launched astronauts and the Juno I, Juno II, Thor-Delta, and Atlas-Agena rockets launched satellites from Cape Canaveral. These are mounted upright whereas the largest rocket, a Saturn IB, is mounted on its side. Saturn IB rockets launched Apollo Command/Service Modules into Earth orbit for Apollo, Skylab, and the Apollo–Soyuz Test Project.

The Juno I on display is painted with serial number "UE" like the one that launched the first US satellite, Explorer I. A Juno II launched the first American probe to escape Earth's gravity and fly past the Moon. Atlas-Agena rockets launched early probes to the Moon, Venus, and Mars, as well as the Agena target vehicles used in rendezvous and docking by Gemini spacecraft—a necessary technique for the following Apollo missions. The Thor-Delta was one of the most reliable and frequently-used launch vehicles. The Titan II on display is a refurbished Air Force ICBM with a replica Gemini spacecraft, painted to resemble the Gemini 3 booster. It was rescued from the Arizona Boneyard and erected in 2010 to replace a deteriorating mockup composed of two first stages which had been on display for more than 20 years.[14] The Saturn IB on display is SA-209 which was designated for a possible Skylab Rescue mission.

The garden also features mock-ups of capsules from the Mercury, Gemini and Apollo programs that visitors can get in, and the walkway and white room that Apollo astronauts used to access their capsules from the launch tower of LC-39A. Attached to the white room is a Command Module trainer.[15] A F-1 rocket engine that powered the first stage of the Saturn V is also on display. Free guided tours of the garden are available daily.[16][17] 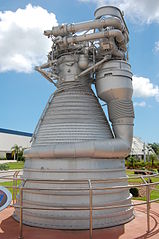 LC-39A walkway to white room with Atlas-Agena, Mercury-Atlas, Juno II, Thor-Delta, and Juno I in background 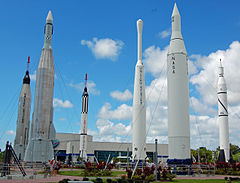 KSC rocket garden
Add a photo to this gallery

The Apollo/Saturn V Center (Template:Coord) is located north-northwest of Launch Complex 39 on the Kennedy Parkway N near the Shuttle Landing Facility and is only accessible to visitors by bus tours from the Visitors Complex. The center, which opened December 17, 1996,[18][19] was designed by award-winning experience designer Bob Rogers (designer) and the design team BRC Imagination Arts,[20] for NASA and Delaware North Companies.[21]

The building was built to house a restored Saturn V launch vehicle and features other exhibits related to the Apollo program. Until the structure was built, the Saturn V was displayed horizontally for many years outdoors just south of the Vehicle Assembly Building and tour buses brought visitors to it. The rocket's first stage is S-IC-T (a test stage) and the second (S-II) and third stages (S-IVB) are from SA-514, which would have been used for the canceled Apollo 19 mission.[citation needed] The interstages between the first and second stages and between the second and third stages are not present, but the Instrument Unit is on display (showing the internal equipment). The booster has been repainted to resemble Apollo 11's Saturn V. Its command module is the boilerplate BP-30.

Other large exhibits include the Apollo 14 command module, an unused Apollo command/service module (CSM-119) and an unused Lunar Module (LM-9). CSM-119 was designated for a possible Skylab rescue mission and as a backup for the Apollo–Soyuz Test Project. LM-9 was originally scheduled to be used on Apollo 15, but when missions after Apollo 17 were canceled, a later LM (LM-10) was used instead.

Also on display is a slice of Moon rock that visitors can touch. Other exhibits include a Lunar Module simulator, a replica of a lunar rover, a variety of space suits, Alan Shepard's Corvette, a piece of Apollo 13's Lunar Module returned by the astronauts, a tool cart, the Modular Equipment Transporter, like the one used on the Moon by Apollo 14, a van used to carry astronauts to the launch pad, and a large cut-away scale model of the Saturn V. Two theaters allow visitors to relive parts of the Apollo program – one simulates the environment inside an Apollo-era firing room during the launch of Apollo 8 and the other simulates the Apollo 11 landing. 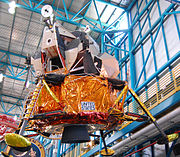 Apollo astronaut van
Add a photo to this gallery

In 2010, the center announced a $100 million plan to house a retired shuttle orbiter in a 10-story 64,000 square feet (Template:Convert/round m2) facility.[22] On April 12, 2011, the 30th anniversary of the launch of STS-1, NASA announced that Atlantis would be provided to the visitors center for display after its last flight on STS-135 and subsequent decommissioning.[23] The exhibit officially opened on 29 June 2013.[24]

The Space Mirror Memorial, also known as the Astronaut Memorial, is maintained by the Astronauts Memorial Foundation and is located behind the IMAX theater on the grounds of the main Visitor Complex. It honors NASA astronauts along with several military and civilian astronauts who have died in the line of duty.

Angry Birds Space Encounter opened at Kennedy Space Center Visitor Complex on March 22, 2013. The attraction was based on Angry Birds and Angry Birds Space, which is a first in the U.S. The 4,485 square foot attraction included six interactive stations which encouraged young people to use math and science.[27] It was a temporary exhibit, and closed in early 2015.[28]

The Visitors Complex also hosts special ticketed events run by Delaware North. Naturalization ceremonies have been conducted in the Rocket Garden, space shuttle launch viewing was offered from the Visitors Complex, Astronaut Hall of Fame and NASA Causeway directly downriver from launch pads. The Hall of Fame hosts a yearly induction ceremony.[29] The Astronaut Training Experience is also offered by Delaware North at the Astronaut Hall of Fame with several full-sized mock-ups of the space shuttle, Mission Control and training hardware.[30] The complex also runs week-long accredited day camps for children in grades 2–9.[31]

Retrieved from "https://nasa.fandom.com/wiki/Kennedy_Space_Center_Visitor_Complex?oldid=16682"
Community content is available under CC-BY-SA unless otherwise noted.