The Lunar Reconnaissance Orbiter (LRO) is a NASA robotic spacecraft currently orbiting the Moon in an eccentric polar mapping orbit.[1][2] Data collected by LRO is essential to planning future human and robotic missions to the Moon. Its detailed mapping program is identifying safe landing sites, locating potential resources on the Moon, characterizing the radiation environment, and demonstrating new technologies.[3][4]

The probe has made a 3-D map of the Moon's surface and has provided high resolution images of Apollo landing sites.[5][6] The first images from LRO were published on July 2, 2009, showing a region in the lunar highlands south of Mare Nubium (Sea of Clouds).[7]

Launched on June 18, 2009,[8] in conjunction with the Lunar Crater Observation and Sensing Satellite (LCROSS), as the vanguard of NASA's Lunar Precursor Robotic Program,[9] LRO was the first United States mission to the Moon in over ten years.[10] LRO and LCROSS were launched as part of the United States's Vision for Space Exploration program.

The total cost of the mission is reported as US$583 million, of which $504 million pertains to the main LRO probe and $79 million to the LCROSS satellite.[11]

Developed at NASA's Goddard Space Flight Center, LRO is a large (1,916 kg/Template:Convert/round lb[11]) and sophisticated spacecraft. Its mission duration was planned for one year,[12] but has since been extended numerous times after review by NASA.

After completing a preliminary design review in February 2006 and a critical design review in November 2006,[13] the LRO was shipped from Goddard to Cape Canaveral Air Force Station on February 11, 2009.[14] Launch was planned for October 2008, but this slid to April as the spacecraft underwent testing in a thermal vacuum chamber.[15] Launch was rescheduled for June 17, 2009, because of the delay in a priority military launch,[16] and happened one day later, on June 18. The one-day delay was to allow the Space Shuttle Endeavour a chance to lift off for mission STS-127 following a hydrogen fuel leak that canceled an earlier planned launch.[17]

Areas of investigation include selenodetic global topography; the lunar polar regions, including possible water ice deposits and the lighting environment; characterization of deep space radiation in lunar orbit; and high-resolution mapping, at a maximum resolution of 50 cm/pixel (Template:Convert/round in/pixel), to assist in the selection and characterization of future landing sites.[18][19]

In addition, LRO has provided some of the first images and precise locations of landers and equipment from previous American and Russian lunar missions, including the Apollo sites.[5]

The orbiter carries a complement of six instruments and one technology demonstration:

LROC
The Lunar Reconnaissance Orbiter Camera addresses the measurement requirements of landing site certification and polar illumination.[24] LROC comprises a pair of narrow-angle push-broom imaging cameras[25][26] (NAC) and a single wide-angle camera (WAC). LROC has flown several times over the historic Apollo lunar landing sites at 50 km (Template:Convert/round mi) altitude; with the camera's high resolution, the lunar rovers and Lunar Module descent stages and their respective shadows are clearly visible, along with other equipment previously left on the Moon. The mission is returning approximately 70–100 terabytes of image data. It is expected that this photography will boost public acknowledgement of the validity of the landings, and further discredit Apollo conspiracy theories.[5]
Mini-RF
The Miniature Radio Frequency radar demonstrated new lightweight SAR and communications technologies and located potential water-ice.[27]

Prior to the LRO's launch, NASA gave members of the public the opportunity to have their names placed in a microchip on the LRO. The deadline for this opportunity was July 31, 2008.[28] About 1.6 million names were submitted.[28][29]

On June 23, 2009, the Lunar Reconnaissance Orbiter entered into orbit around the Moon after a four and a half day journey from the Earth. When launched, the spacecraft was aimed at a point ahead of the Moon's position. A mid-course correction was required during the trip in order for the spacecraft to correctly enter Lunar orbit. Once the spacecraft reached the far side of the Moon, its rocket motor was fired in order for it to be captured by the Moon's gravity into an elliptical lunar orbit.[30] A series of four rocket burns over the next four days put the satellite into its commissioning phase orbit where each instrument was brought online and tested. On September 15, 2009, the spacecraft started its primary mission by orbiting the Moon at about 50 km (Template:Convert/round mi) for one year.[31] After completing its one-year exploration phase, in September 2010, LRO was handed over to NASA's Science Mission Directorate to continue the science phase of the mission.[32] It will continue in its 50 km circular orbit, but eventually will be transitioned into a fuel-conserving elliptical orbit for the remainder of the mission.

NASA's LCROSS mission culminated with two lunar impacts at 11:31 and 11:36 UTC on October 9.[33] The goal of the impact was the search for water in the Cabeus crater near the Moon's south pole,[34] and preliminary results indicated the presence of both water and hydroxyl, an ion related to water.[35][36]

On January 4, 2011, the Mini-RF instrument team for the Lunar Reconnaissance Orbiter (LRO) found that the Mini-RF radar transmitter had suffered an anomaly. Mini-RF has suspended normal operations. Despite being unable to transmit, the instrument is being used to collect bistatic radar observations using radar transmissions from the Earth. The Mini-RF instrument has already met its science mission success criteria by collecting more than 400 strips of radar data since September 2010.[37]

In January 2013, NASA tested one-way laser communication with LRO by sending an image of the Mona Lisa to the Lunar Orbiter Laser Altimeter (LOLA) instrument on LRO from the Next Generation Satellite Laser Ranging (NGSLR) station at NASA's Goddard Space Flight Center in Greenbelt, Md.[38]

In May 2015, LRO's orbit was altered to fly 20 km (Template:Convert/round mi) above the Moon's south pole, allowing higher resolution data to be obtained from the Lunar Orbiter Laser Altimeter (LOLA) and Diviner instruments over the permanently-shadowed craters there.[39]

On August 21, 2009, the spacecraft, along with the Chandrayaan-1 orbiter, attempted to perform a bistatic radar experiment to detect the presence of water ice on the lunar surface,[40][41] but the test was unsuccessful.[42]

On March 15, 2011, the final set of data from the exploration phase of the mission was released to the NASA Planetary Data System. The spacecraft's seven instruments delivered more than 192 terabytes of data. LRO has already collected as much data as all other planetary missions combined.[44] This volume of data is possible because the Moon is so close and because LRO has its own dedicated ground station and doesn't have to share time on the Deep Space Network. Among the latest products is a global map with a resolution of 100 m/pixel (Template:Convert/round ft/pixel) from the Lunar Reconnaissance Orbiter Camera (LROC).

In March 2015, the LROC team reported having imaged the location of an impact whose flash was observed from Earth on March 17, 2013. The team found the crater by going back to images taken in the first year or two and comparing them to images taken after the impact, called temporal pairs. The images revealed splotches, small areas whose reflectance is markedly different than that of the surrounding terrain, presumably from disruption of the surface by recent impacts.[45][46]

By September 2015, LROC had imaged nearly three-fourths of the lunar surface at high resolution, revealing more than 3,000 lobate scarps. Their global distribution and orientation suggests that the faults are created as the Moon shrinks, with influence by gravitational tidal forces from Earth.[47] 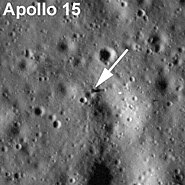 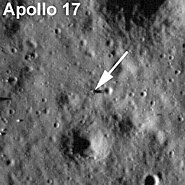 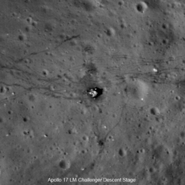 LRO views LADEE at a distance of 9 km (Template:Convert/round mi). 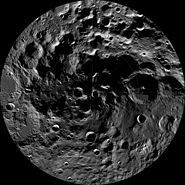 Retrieved from "https://nasa.fandom.com/wiki/Lunar_Reconnaissance_Orbiter?oldid=24423"
Community content is available under CC-BY-SA unless otherwise noted.