The Mars Climate Orbiter (formerly the Mars Surveyor '98 Orbiter) was a 338-kilogram (Template:Convert/LoffAonSon) robotic space probe launched by NASA on December 11, 1998 to study the Martian climate, Martian atmosphere, and surface changes and to act as the communications relay in the Mars Surveyor '98 program for Mars Polar Lander. However, on September 23, 1999, communication with the spacecraft was lost as the spacecraft went into orbital insertion, due to ground-based computer software which produced output in non-SI units of pound-seconds (lbf s) instead of the SI units of newton-seconds (N s) specified in the contract between NASA and Lockheed. The spacecraft encountered Mars on a trajectory that brought it too close to the planet, causing it to pass through the upper atmosphere and disintegrate.[1][2]

After the loss of Mars Observer and the onset of the rising costs associated with the future International Space Station, NASA began seeking less expensive, smaller probes for scientific interplanetary missions. In 1994, the Panel on Small Spacecraft Technology was established to set guidelines for future miniature spacecraft. The panel determined that the new line of miniature spacecraft should be under 1000 kilograms with highly focused instrumentation.[3] In 1995, a new Mars Surveyor program began as a set of missions designed with limited objectives, low costs, and frequent launches. The first mission in the new program was Mars Global Surveyor, launched in 1996 to map Mars and provide geologic data using instruments intended for Mars Observer.[4] Following Mars Global Surveyor, Mars Climate Orbiter carried two instruments, one originally intended for Mars Observer, to study the climate and weather of Mars.

The primary science objectives of the mission included:[5]

The Mars Climate Orbiter bus measured 2.1 meters tall, 1.6 meters wide and 2 meters deep. The internal structure was largely constructed with graphite composite/aluminum honeycomb supports, a design found in many commercial airplanes. With the exception of the scientific instruments, battery and main engine, the spacecraft included dual redundancy on the most important systems.[5][6]

The spacecraft included a 1.3-meter high-gain antenna to transceive data with the Deep Space Network over the x-band. The radio transponder designed for the Cassini–Huygens mission was used as a cost-saving measure. It also included a two-way UHF radio frequency system to relay communications with Mars Polar Lander upon an expected landing on December 3, 1999.[5][6][8]

The space probe was powered with a 3-panel solar array, providing an average of 500 W at Mars. Deployed, the solar array measured 5.5 meters in length. Power was stored in 12-cell, 16-amp-hour Nickel hydrogen batteries. The batteries were intended to be recharged when the solar array received sunlight and power the spacecraft as it passed into the shadow of Mars. When entering into orbit around Mars, the solar array was to be utilized in the aerobraking maneuver, to slow the spacecraft until a circular orbit was achieved. The design was largely adapted from guidelines from the Small Spacecraft Technology Initiative outlined in the book, Technology for Small Spacecraft.[5][6][9]

In an effort to simplify previous implementations of computers on spacecraft, Mars Climate Orbiter featured a single computer using an IBM RAD6000 processor capable of 5MHz, 10MHz and 20MHz operations. Data storage was to be maintained on 128MB of random-access memory (RAM) and 18MB of flash memory. The flash memory was intended to be used for highly important data, including triplicate copies of the flight system software.[5]

The cost of the mission was $327.6 million total for the orbiter and lander, comprising $193.1 million for spacecraft development, $91.7 million for launching it, and $42.8 million for mission operations.[10]

The Pressure Modulated Infrared Radiometer (PMIRR) uses narrow-band radiometric channels and two pressure modulation cells to measure atmospheric and surface emissions in the thermal infrared and a visible channel to measure dust particles and condensates in the atmosphere and on the surface at varying longitudes and seasons.[11] Its principal investigator was Daniel McCleese at JPL/CALTECH. Similar objectives were later achieved with Mars Climate Sounder on board Mars Reconnaissance Orbiter. Its objectives:[12]

The Mars Color Imager (MARCI) is a two-camera (medium-angle/wide-angle) imaging system designed to obtain pictures of the martian surface and atmosphere. Under proper conditions, resolutions up to 1 kilometer (0.6 miles) are possible.[13][14] The principal investigator on this project was Michael Malin at Malin Space Science Systems and the project was reincorporated on Mars Reconnaissance Orbiter. Its objectives:[13]

The Mars Climate Orbiter probe was launched on December 11, 1998 at 18:45:51 UTC by the National Aeronautics and Space Administration from Space Launch Complex 17A at the Cape Canaveral Air Force Station in Florida, aboard a Delta II 7425 launch vehicle. The complete burn sequence lasted 42 minutes bringing the spacecraft into a Hohmann transfer orbit, with a final velocity of 5.5 km/s relative to Mars, and sending the probe into a 669 million kilometer trajectory.[5][8] At launch, Mars Climate Orbiter weighed 638 kilograms (1,418 pounds) including propellant.[15] 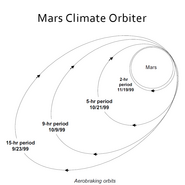 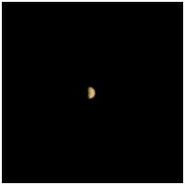 This image of Mars on September 7, 1999 is the only image acquired by the Orbiter.

Diagram comparing the intended and actual trajectories of the Orbiter
Add a photo to this gallery
See also: Exploration of Mars

Mars Climate Orbiter began the planned orbital insertion maneuver on September 23, 1999 at 09:00:46 UTC. Mars Climate Orbiter went out of radio contact when the spacecraft passed behind Mars at 09:04:52 UTC, 49 seconds earlier than expected, and communication was never reestablished. Due to complications arising from human error, the spacecraft encountered Mars at a lower than anticipated altitude and disintegrated due to atmospheric stresses. Mars Reconnaissance Orbiter has since completed most of the intended objectives for this mission.

Cause of failure[edit | edit source]

On November 10, 1999, the Mars Climate Orbiter Mishap Investigation Board released a Phase I report, detailing the suspected issues encountered with the loss of the spacecraft. Previously, on September 8, 1999, Trajectory Correction Maneuver-4 was computed and then executed on September 15, 1999. It was intended to place the spacecraft at an optimal position for an orbital insertion maneuver that would bring the spacecraft around Mars at an altitude of 226 kilometers on September 23, 1999. However, during the week between TCM-4 and the orbital insertion maneuver, the navigation team indicated the altitude may be much lower than intended at 150 to 170 kilometers. Twenty-four hours prior to orbital insertion, calculations placed the orbiter at an altitude of 110 kilometers; 80 kilometers is the minimum altitude that Mars Climate Orbiter was thought to be capable of surviving during this maneuver. Post-failure calculations showed that the spacecraft was on a trajectory that would have taken the orbiter within 57 kilometers of the surface, where the spacecraft likely disintegrated because of atmospheric stresses.

The primary cause of this discrepancy was that one piece of ground software supplied by Lockheed Martin produced results in a United States customary unit, contrary to its Software Interface Specification (SIS), while a second system, supplied by NASA, expected those results to be in SI units, in accordance with the SIS. Specifically, software that calculated the total impulse produced by thruster firings calculated results in pound-seconds. The trajectory calculation software then used these results—expected to be in newton-seconds—to update the predicted position of the spacecraft.[16]

The discrepancy between calculated and measured position, resulting in the discrepancy between desired and actual orbit insertion altitude, had been noticed earlier by at least two navigators, whose concerns were dismissed. A meeting of trajectory software engineers, trajectory software operators (navigators), propulsion engineers, and managers, was convened to consider the possibility of executing Trajectory Correction Maneuver-5, which was in the schedule. Attendees of the meeting recall an agreement to conduct TCM-5, but it was ultimately not done.[citation needed]

Retrieved from "https://nasa.fandom.com/wiki/Mars_Climate_Orbiter?oldid=24595"
Community content is available under CC-BY-SA unless otherwise noted.