The Origins, Spectral Interpretation, Resource Identification, Security, Regolith Explorer (OSIRIS REx) is a planned NASA asteroid study and sample return mission.[1] The launch is planned for September 8, 2016. The mission is to study asteroid 101955 Bennu, a carbonaceous asteroid (formerly designated 1999 RQ36) and in 2023 to return to Earth a sample for detailed analysis. Material returned is expected to enable scientists to learn more about the time before the formation and evolution of the Solar System, initial stages of planet formation, and the source of organic compounds which led to the formation of life.[2]

The cost of the mission will be approximately USD $800 million[3] not including the launch vehicle, which is about $183.5 million.[4] Lockheed Martin has completed assembly and testing of the spacecraft. It is the third planetary science mission selected in the New Frontiers Program, after Juno and New Horizons. The Principal Investigator is Dante Lauretta from the University of Arizona.

After traveling for approximately two years, the spacecraft is to rendezvous with asteroid 101955 Bennu in 2018 and begin 505 days of surface mapping at a distance of approximately 5 km (Template:Convert/round mi).[7] Results of that mapping will be used by the mission team to select the site from which to take a sample of the asteroid's surface. Then a close approach (without landing) will be attempted to allow extension of a robotic arm to gather the sample.[8]

An asteroid was chosen as the target of study because an asteroid is a 'time capsule' from the birth of our Solar System. In particular, 101955 Bennu was selected because of the availability of pristine carbonaceous material, a key element in organic molecules necessary for life as well as representative of matter from before the formation of Earth. Organic molecules, such as amino acids, have previously been found in meteorite and comet samples, indicating that some ingredients necessary for life can be naturally synthesized in outer space.[7]

Following collection (from 60 grams to 2 kilograms, or 2.1 oz to 4.4 lb) in September 2019, the sample will be returned to Earth in a capsule similar to that which returned the samples of comet 81P/Wild on the Stardust spacecraft. The return trip to Earth will be shorter, allowing the sample to return and land at the Utah Test and Training Range in September 2023. The capsule will then be transported to the Johnson Space Center for processing in a dedicated research facility.[7]

The acronym OSIRIS was chosen in reference to the ancient Egyptian mythological god Osiris, the underworld lord of the dead. He was classically depicted as a green-skinned man with a pharaoh's beard, partially mummy-wrapped at the legs and wearing a distinctive crown with two large ostrich feathers at either side. Rex means 'king' in Latin.[9] His name was chosen for this mission as asteroid Bennu is a threatening Earth impactor capable of causing vast destruction and death.[9][10]

Launch is planned for September 8, 2016 on a United Launch Alliance Atlas V 411.[11] Interested persons were able to have their names[12] or artwork on the mission's spirit of exploration saved on a microchip to be carried in the spacecraft.[13] Submitted works of art will be saved on a chip on the spacecraft.

After an extensive remote sensing campaign, a sample site will be chosen and rehearsals will be performed leading up to the final sampling event. The solar arrays will be raised into a "Y-wing" configuration to minimize the chance of dust accumulation during contact and provide more ground clearance in case the spacecraft tips over (up to 45°) during contact.[6] The descent will be very slow in order to minimize thruster firings prior to contact in order to reduce the likelihood of asteroid surface contamination by unreacted hydrazine propellant. The spacecraft will descend to about 5 m (Template:Convert/round ft) from the surface. Upon surface contact by the arm a 5 second timer will limit collection time to avoid collision. After the timer expires the back-away maneuver will initiate a safe departure from the asteroid.[6] The spacecraft will then halt the drift away from the asteroid in case it is necessary to go back for a second sample attempt. The spacecraft will use several images and maneuvers to verify the sample has been acquired as well as determine its mass within ±90 grams.[6]

Finally, the Sample Return Capsule (SRC) lid is opened to allow the sampler head to move into position. The arm is then retracted into the launch configuration and the SRC lid is closed and latched for Earth return.

The science objectives of the mission are:[15]

Telescopic observations have helped define the orbit of 101955 Bennu, a near-Earth object with a mean diameter in the range of 480 to 511 meters (1575 to 1678 ft).[16] It completes an orbit of the Sun every 436.604 days (1.2 years). This orbit takes it close to the Earth every six years. Although the orbit is reasonably well known, scientists continue to refine it. It is critical to know the orbit of Bennu because recent calculations produced a cumulative probability of 1 in 1410 (or 0.071%) of impact with Earth in the period 2169 to 2199.[17] Part of the OSIRIS-REx mission is to refine understanding of non-gravitational effects (such as the Yarkovsky effect) on this orbit, and the implications of those effects for Bennu's collision probability. Knowing Bennu's physical properties will be critical for future scientists to know when developing an asteroid impact avoidance mission.[18]

Telescopic observations have revealed some basic properties of Bennu. They indicate that it is very dark and is classified as a B-type asteroid, a sub-type of the carbonaceous C-type asteroids. Such asteroids are considered "primitive", having undergone little geological change from their time of formation.

In addition to its telecommunication equipment, the spacecraft will carry a suite of instruments which will study the asteroid in many wavelengths,[21] as well as image the asteroid, and retrieve a physical sample to return to Earth.

The OSIRIS-REx Camera Suite (OCAMS) consists of the PolyCam, the MapCam, and the SamCam.[22] Together they acquire information on asteroid Bennu by providing global mapping, sample site reconnaissance and characterization, high-resolution imaging, and records of the sample acquisition.[23]

The OSIRIS-REx Laser Altimeter (OLA) is a scanning and LIDAR instrument that will provide high resolution topographical information throughout the mission.[24] The information received by OLA will create global topographic maps of Bennu, local maps of candidate sample sites, ranging in support of other instruments, and support navigation and gravity analyses.

OLA will scan the surface of Bennu at specific intervals in the mission to rapidly map out the entire surface of the asteroid to achieve its primary objective of producing local and global topographic maps. What OLA brings back about Bennu will also be used to develop a control network relative to the center of mass of the asteroid and enhance and refine gravitational studies of Bennu.

OLA has a single common receiver and two complementary transmitter assemblies which enhance the resolution of the information brought back. OLA’s high-energy laser transmitter is used for ranging and mapping from 1 to 7.5 km. The low-energy transmitter is used for ranging and imaging at smaller distances (500 m to 1 km). The repetition rate of these transmitters sets the data acquisition rate of OLA. Laser pulses from both the low and high energy transmitters are directed onto a movable scanning mirror, which is co-aligned with the field of view of the receiver telescope limiting the effects of background solar radiation. Each pulse provides target range, azimuth, elevation, received intensity and a time-tag.

OLA is funded by the Canadian Space Agency (CSA) and is being built by MacDonald, Dettwiler and Associates at Brampton, Ontario, Canada.[25] OLA was delivered for integration with the spacecraft on November 17, 2015.[26][27]

The OSIRIS-REx Visible and IR Spectrometer (OVIRS) is a spectrometer, which measures light to provide mineral and organic spectral maps and local spectral information of candidate sample sites.[28] It also provides full-disc asteroid spectral data, global spectral maps (20 m resolution), and spectra of the sample site (0.08–2 m resolution). These data will be used in concert with OTES spectra to guide sample-site selection. These spectral ranges and resolving powers are sufficient to provide surface maps of mineralogical and molecular components including carbonates, silicates, sulfates, oxides, adsorbed water and a wide range of organic compounds. It provides at least two spectral samples per resolution element taking full advantage of the spectral resolution.

OTES provides full-disc Bennu spectral data, global spectral maps, and local sample site spectral information used to characterize the global, regional, and local mineralogic composition and thermal emission from the asteroid surface. The wavelength range, spectral resolution, and radiometric performance are sufficient to resolve and identify the key vibrational absorption features of silicate, carbonate, sulfate, phosphate, oxide, and hydroxide minerals. OTES is also used to measure the total thermal emission from Bennu in support of the requirement to measure emitted radiation globally. Based on the performance of Mini-TES in the dusty surface environment of Mars, OTES is expected to be resilient to extreme dust contamination on the optical elements.

The Regolith X-ray Imaging Spectrometer (REXIS) will provide an X-ray spectroscopy map of Bennu, complementing core OSIRIS-REx mission science.[30] REXIS is a collaborative development by four groups within Massachusetts Institute of Technology (MIT) and Harvard University, with the potential to involve more than 100 students throughout the process. REXIS is based on flight heritage hardware, thereby minimizing elements of technical risk, schedule risk, and cost risk.

REXIS is a coded aperture soft X-ray (0.3–7.5 keV) telescope that images X-ray fluorescence line emission produced by the interaction of solar X-rays and the solar wind with the regolith of Bennu. Images are formed with 21 arcminute resolution (4.3 m spatial resolution at a distance of 700 m). Imaging is achieved by correlating the detected X-ray image with a 64 x 64 element random mask (1.536 mm pixels). REXIS will store each X-ray event data in order to maximize the data storage usage and to minimize the risk. The pixels will be addressed in 64 x 64 bins and the 0.3–7.5 keV range will be covered by 5 broad bands and 11 narrow line bands. A 24 s resolution time tag will be interleaved with the event data to account for Bennu rotation. Images will be reconstructed on the ground after downlink of the event list. Images are formed simultaneously in 16 energy bands centered on the dominant lines of abundant surface elements from O-K (0.5 keV) to Fe-Kß (7 keV) as well the representative continuum. During orbital phase 5B, a 21-day orbit 700 m from the surface of Bennu, a total of at least 133 events/asteroid pixel/energy band are expected under 2 keV; enough to obtain significant constraints on element abundances at scales larger than 10 m.

The sample return system, called Touch-And-Go Sample Acquisition Mechanism (TAGSAM), consists of a sampler head with an articulated arm.[31] An on-board nitrogen source will support up to three separate sampling attempts for a minimum total amount of 60 g of sample. The surface contact pads will also collect fine-grained material.

Highlights of the TAGSAM instrument and technique include: 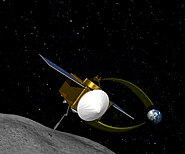 Illustration of OSIRIS-REx collecting a sample from asteroid Bennu. 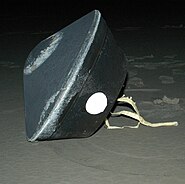 Retrieved from "https://nasa.fandom.com/wiki/OSIRIS-REx?oldid=24613"
Community content is available under CC-BY-SA unless otherwise noted.