The PGM-11 Redstone was the first large American ballistic missile. A short-range ballistic missile (SRBM), it was in active service with the United States Army in West Germany from June 1958 to June 1964 as part of NATO's Cold War defense of Western Europe. It was the first missile to carry a live nuclear warhead, in the 1958 Pacific Ocean weapons test, Hardtack Teak. Chief Engineer Wernher von Braun personally witnessed this historic launch and detonation.[1]

Redstone was a direct descendant of the German V-2 rocket, developed by a team of predominantly German rocket engineers brought to the United States after World War II as part of Operation Paperclip. The design used an upgraded engine from Rocketdyne that allowed the missile to carry the W39 warhead which weighed 6,900 pounds (Template:Convert/round kg) with its reentry vehicle to a range of about 175 miles (Template:Convert/round km). Redstone's prime contractor was the Chrysler Corporation.[2]

A major effort to improve Redstone's reliability produced one of the most reliable rockets of the era. Dubbed "the Army's Workhorse", it spawned an entire rocket family which had an excellent launch record and holds a number of firsts in the US space program, notably launching the first US astronaut. It was retired by the Army in 1964 and replaced by the MGM-31 Pershing. Surplus missiles were widely used for test missions and space launches, including the first US man in space, and in 1967 the launch of Australia's first satellite.

A product of the Army Ballistic Missile Agency (ABMA) at Redstone Arsenal in Huntsville, Alabama under the leadership of Wernher von Braun, Redstone was designed as a surface-to-surface missile for the U.S. Army. It was named for the arsenal on April 8, 1952, which traced its name to the region's red rocks and soil.[3] Chrysler was awarded the prime production contract and began missile and support equipment production in 1952 at the newly renamed Michigan Ordnance Missile Plant in Warren, Michigan. The navy-owned facility was previously known as the Naval Industrial Reserve Aircraft Plant used for jet engine production. Following the cancellation of a planned jet engine program, the facility was made available to the Chrysler Corporation for missile production. Rocketdyne Division of North American Aviation Company provided the rocket engines; Ford Instrument Company, division of Sperry Rand Corporation, produced the guidance and control systems; and Reynolds Metals Company fabricated fuselage assemblies as subcontractors to Chrysler. The first Redstone lifted off from LC-4A at Cape Canaveral on August 20, 1953. It flew for one minute and 20 seconds before suffering an engine failure and falling into the sea. Following this partial success, the second test was conducted on January 27, 1954, this time without a hitch as the missile flew 55 miles. After these first two prototypes were flown, an improved engine was introduced to reduce problems with LOX turbopump cavitation.

The third Redstone flight on May 5 was a total loss as the engine cut off one second after launch, causing the rocket to fall back on the pad and explode. After this incident, Major General Holger Toftoy pressured Werner von Braun for the cause of the failure. The latter replied that he had no idea, but they would review telemetry and other data to find out. Toftoy persisted, asking "Werner, why did the rocket explode?" An exasperated von Braun said "It exploded because the damn sonofabitch blew up!"

Von Braun pressured the ABMA team to improve reliability and workmanship standards, allegedly remarking that "Missile reliability will require that the target area is more dangerous than the launch area." Subsequent test flights went better and the Army declared Redstone operational in mid-1955. Testing was moved from LC-4 to the bigger LC-5 and LC-6.

In 1955, the Jupiter C rocket (not to be confused with the later, unrelated Jupiter IRBM) was developed as an enhanced Redstone for atmospheric and reentry vehicle tests. It had elongated propellant tanks for increased burn time and a new engine that burned a fuel mixture known as hydyne and would prove the basis for the Jupiter C/Juno I that was used for the first successful US space launch.

The Mercury-Redstone Launch Vehicle was a derivation of the Redstone with a fuel tank increased in length by 6 feet (Template:Convert/round m) and was used on May 5, 1961 to launch Alan Shepard on his sub-orbital flight to become the second person and first American in space.[4] It retained the Jupiter C's longer propellant tanks, but went back to using ethyl alcohol/water for propellant instead of hydyne.

The Redstone program proved to be a bone of contention between the Army and Air Force due to their different ideas of nuclear warfare. The Army favored using small warheads on mobile missiles as tactical battlefield weapons while the Air Force, which was responsible for the ICBM program, wanted large cross-continental missiles that could strike Soviet targets and rapidly cripple the USSR's infrastructure and ability to wage war.

With the arrival of newer solid-fueled missiles that could be stored and not require fueling before launch, Redstone was rendered obsolete and production ended in 1961. The 40th Artillery Group was deactivated in February 1964 and 46th Artillery Group was deactivated in June 1964, as Redstone missiles were replaced by the Pershing missile in the U.S. Army arsenal. All Redstone missiles and equipment deployed to Europe were returned to the United States by the third quarter of 1964. In October 1964, the Redstone missile was ceremonially retired from active service at Redstone Arsenal.

From 1966 to 1967, a series of surplus modified Redstones called Spartas were launched from Woomera, South Australia as part of a joint U.S.–United Kingdom–Australian research program aimed at understanding re-entry phenomena. These Redstones had two solid fuel upper stages added. The U.S. donated a spare Sparta for Australia's first satellite launch, WRESAT, in November 1967.

Redstone was capable of flights from 57.5 miles (Template:Convert/round km) to 201 miles (Template:Convert/round km). It consisted of a thrust unit for powered flight and a missile body for overall missile control and payload delivery on target. During powered flight, Redstone burned a fuel mixture of 25 percent water–75 percent ethyl alcohol with liquid oxygen (LOX) used as the oxidizer. Later Redstones used Hydyne, 60% unsymmetrical dimethylhydrazine (UDMH) and 40% diethylenetriamine (DETA), as the fuel.[5][6][7] The missile body consisted of an aft unit containing the instrument compartment, and the warhead unit containing the payload compartment and the radar altimeter fuze. The missile body was separated from the thrust unit 20–30 seconds after the termination of powered flight, as determined by the preset range to target. The body continued on a controlled ballistic trajectory to the target impact point. The thrust unit continued on its own uncontrolled ballistic trajectory, impacting short of the designated target. 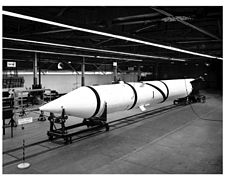 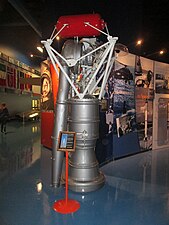 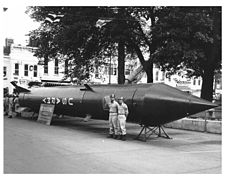 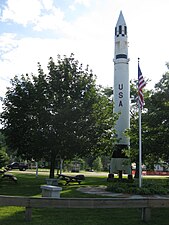 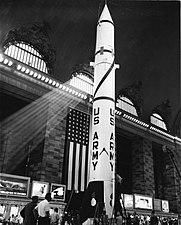 Redstone missile on display in Grand Central Terminal In New York July 7, 1957
Add a photo to this gallery

A Redstone serves as a landmark in Warren, New Hampshire in the center of the village green. It was donated by Henry T. Asselin, who transported the missile from Redstone Arsenal in 1971, then placed in honor of long-time U.S. Senator Norris Cotton, a Warren native. A Redstone also launched another Granite Stater into suborbital flight: Alan Shepard of Derry.[14]

Retrieved from "https://nasa.fandom.com/wiki/PGM-11_Redstone?oldid=24616"
Community content is available under CC-BY-SA unless otherwise noted.