The Payload Assist Module (PAM) is a modular upper stage designed and built by McDonnell Douglas (now Boeing), using Thiokol Star-series solid propellant rocket engines. The PAM was used with the Space Shuttle, Delta, and Titan launchers and carried satellites from low Earth orbit to a geostationary transfer orbit or an interplanetary course. The payload was spin stabilized by being mounted on a rotating plate.[1] Originally developed for the Space Shuttle, different versions of the PAM were developed:

The PAM-D module, used as the third stage of the Delta II rocket, is the only version in use today.

On January 12, 2001, a PAM-D module re-entered the atmosphere after a "catastrophic orbital decay".[2] The PAM-D stage, which had been used to launch the GPS satellite 2A-11 in 1993, crashed in the sparsely populated Saudi Arabian desert, where it was positively identified.[2] 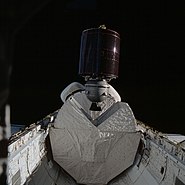 This article is a stub. You can help National Aeronautics and Space Administration Wiki by expanding it.

Retrieved from "https://nasa.fandom.com/wiki/Payload_Assist_Module?oldid=23196"
Community content is available under CC-BY-SA unless otherwise noted.