Template:Infobox spaceflight STS-27 was the 27th NASA Space Shuttle mission, and the third flight of Space Shuttle Atlantis. Launching on 2 December 1988 on a four-day mission, it was the second shuttle flight after the Space Shuttle Challenger disaster of January 1986. STS-27 carried a classified payload for the U.S. Department of Defense.

The Space Shuttle Atlantis (OV-104), at the time the youngest in NASA's shuttle fleet, made its third flight on a classified mission for the United States Department of Defense (DoD). It deployed a single satellite, USA-34. Recently[when?] declassified NASA archival information has identified USA-34 as Lacrosse 1, a side-looking radar, all-weather surveillance satellite, for the US National Reconnaissance Office (NRO) and the Central Intelligence Agency (CIA).[2]

The mission was originally scheduled to launch on 1 December 1988, but the launch was postponed one day because of cloud cover and strong wind conditions at the launch site. Liftoff occurred from Launch Complex 39, Pad B (LC-39B) at Kennedy Space Center, Florida, on 2 December 1988 at 09:30 EST. Atlantis touched down on 6 December 1988 on Runway 17 at Edwards Air Force Base, California, at 18:35 EST. The total mission elapsed time at wheels-stop was 4 days, 9 hours and 6 minutes. Atlantis was returned to the Kennedy Space Center on 13 December and moved into an OPF on 14 December 1988.

There has been speculation that an EVA was conducted during this mission.[3] Interviews with members of the crew several years after the flight indicated a problem with the satellite upon release, whereupon a rendezvous with the satellite was effected and repairs performed. If this is true, it would have necessitated a spacewalk, likely performed by Ross and Shepherd. As a classified DoD mission, details or confirmation of such an EVA remain unreleased.

Atlantis' Thermal Protection System tiles sustained extensive damage during the flight. Ablative insulating material from the right-hand solid rocket booster nose cap had hit the orbiter about 85 seconds into the flight, as seen in footage of the ascent.[4] The STS-27 crew also commented that white material was observed on the windshield at various times during ascent.[5] The crew made an inspection of the shuttle's impacted starboard side using the shuttle's Canadarm robot arm, but the limited resolution and range of the cameras made it impossible to determine the full extent of the tile damage.

The problem was compounded by the fact that the crew was prohibited from using their standard method of sending images to ground control due to the classified nature of the mission. The crew was forced to use a slow, encrypted transmission method, likely causing the images NASA engineers received to be of poor quality, causing them to think the damage was actually "just lights and shadows". They told the crew the damage did not look any more severe than on past missions.[4]

One report describes the crew as "infuriated" that Mission Control seemed unconcerned.[6][7] Commander Gibson did not believe that the shuttle would survive reentry; if instruments indicated that the shuttle was disintegrating, he planned to "tell mission control what I thought of their analysis" in the remaining seconds before his death. Upon landing, the magnitude of the damage to the shuttle astonished NASA; over 700 damaged tiles were noted, and one tile was missing altogether. The tile was located over the steel mounting plate for the L-band antenna, perhaps preventing a burn-through of the sort that would ultimately doom Columbia in 2003.[4] There was almost no damage present on the orbiter's left side. To date, STS-27 Atlantis is the most damaged launch-entry vehicle to return to Earth successfully.[8]

A review team investigated the cause beginning with a detailed inspection of the Atlantis TPS damage, and a review of related inspection reports to establish an in-depth anomaly definition. An exhaustive data review followed to develop a fault tree and several failure scenarios. This and other information gained during the review formed the basis for the team's findings and recommendations.[5]

NASA began a tradition of playing music to astronauts during the Gemini program, and first used music to wake up a flight crew during Apollo 15. Each track is specially chosen, often by the astronauts' families, and usually has a special meaning to an individual member of the crew, or is applicable to their daily activities.[9]

Atlantis on its launchpad. 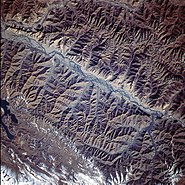 The Brahmaputra River imaged from orbit.

Fiji imaged from orbit.
Add a photo to this gallery

Retrieved from "https://nasa.fandom.com/wiki/STS-27?oldid=23258"
Community content is available under CC-BY-SA unless otherwise noted.