Template:Infobox spaceflight STS-31 was the thirty-fifth mission of the American Space Shuttle program, which launched the Hubble Space Telescope astronomical observatory into Earth orbit. The mission used the Space Shuttle Discovery (the tenth for this orbiter), which lifted off from Launch Complex 39B on 24 April 1990 from Kennedy Space Center, Florida.

Discovery's crew deployed the telescope on 25 April, and spent the rest of the mission tending to various scientific experiments in the shuttle's payload bay and operating a set of IMAX cameras to record the mission. Discovery's launch marked the first time since January 1986 that two Space Shuttles had been on the launch pad at the same time – Discovery on 39B and Columbia on 39A.

Initially, this mission was to be flown in August 1986 as STS-61-J using Atlantis, but was postponed due to the Challenger disaster. John Young was originally assigned to command this mission, which would have been his seventh spaceflight, but was reassigned to an administrative position and was replaced by Loren Shriver in 1988.

STS-31 was launched on 24 April 1990 at 8:33:51 am EDT. A launch attempt on 10 April was scrubbed at T-4 minutes due to a faulty valve in auxiliary power unit (APU) number one. The APU was eventually replaced and the Hubble Space Telescope's batteries were recharged. On launch day, the countdown was briefly halted at T-31 seconds when Discovery's computers failed to shut down a fuel valve line on ground support equipment. Engineers ordered the valve closed and the countdown continued.

The primary payload was the Hubble Space Telescope (HST), deployed in a 380 statute mile (612 kilometres (Template:Convert/round mi)) orbit. The shuttle's orbit in this mission was its highest orbit up to that date, in order for HST to be released near its operational altitude well outside the atmosphere. Discovery orbited the Earth 80 times during the mission.

The main purpose of this mission was to deploy Hubble. It was designed to operate above the Earth's turbulent and obscuring atmosphere to observe celestial objects at ultraviolet, visible and near-infrared wavelengths. The Hubble mission was a joint NASA-ESA effort going back to the late 1970s. The rest of the mission was devoted to photography and onboard experiments. To launch HST into an orbit that guaranteed longevity, Discovery soared to 600 kilometres (Template:Convert/round mi). The record height permitted the crew to photograph Earth's large-scale geographic features not apparent from lower orbits. Motion pictures were recorded by two IMAX cameras, and the results appeared in the IMAX film Destiny in Space. Experiments included a biomedical technology study, advanced materials research, particle contamination and ionizing radiation measurements, and a student science project studying zero gravity effects on electronic arcs. Discovery’s reentry from its higher than usual orbit required a deorbit burn of 4 minutes and 58 seconds, the longest in Shuttle history up to that time.

During the deploy of Hubble, one of the observatory's solar arrays stopped as it unfurled. While ground controllers searched for a way to command HST to unreel the solar array, Mission Specialists McCandless and Sullivan began preparing for a contingency spacewalk in the event that the array could not be deployed through ground control. The array eventually came free and unfurled through ground control, while McCandless and Sullivan were pre-breathing inside the partially depressurized airlock.[2]

NASA began a tradition of playing music to astronauts during the Gemini program, which was first used to wake up a flight crew during Apollo 15. Each track is specially chosen, often by their families, and usually has a special meaning to an individual member of the crew, or is applicable to their daily activities.[3]

Hubble at the pad.

Liftoff of Discovery with the Hubble Space Telescope on board. 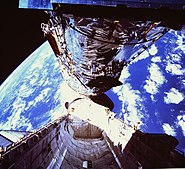 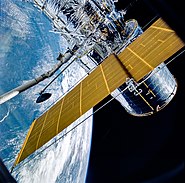 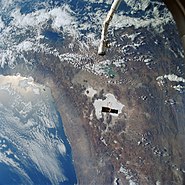 Hubble drifts away over Peru.

Florida and the Bahamas.

Discovery returns home.
Add a photo to this gallery

Retrieved from "https://nasa.fandom.com/wiki/STS-31?oldid=23262"
Community content is available under CC-BY-SA unless otherwise noted.