STS-33 was a NASA Space Shuttle mission, during which Space Shuttle Discovery deployed a payload for the United States Department of Defense (DoD). STS-33 was the 32nd shuttle mission overall, the ninth flight of Discovery, and the fifth shuttle mission in support of the DoD. Due to the nature of the mission, specific details remain classified. Discovery lifted off from Pad A, Launch Complex 39 at Kennedy Space Center (KSC), Florida, on 22 November 1989 at 7:23 pm EST; it landed at Edwards Air Force Base, California, on 28 November.

STS-33 was the original designation for the mission that became STS-51-L, the disastrous final flight of Space Shuttle Challenger. After Challenger's destruction, NASA recycled the mission numbering system back to STS-26, which was the 26th shuttle mission and the first to fly after the disaster.

S. David Griggs, a veteran of STS 51-D, was to have been the pilot of this mission. He was killed in the crash of a vintage WWII aircraft in June 1989 while training to serve as pilot on STS-33, and is commemorated on the mission insignia with a single gold star on the blue field.[2] He was replaced by John Blaha. Sonny Carter, a Mission Specialist on this flight, was killed in a commercial plane crash on 5 April 1991[3] while training to fly on STS-42.

STS-33 was originally scheduled to launch on 20 November, but was delayed because of problems with the integrated electronics assemblies which controlled the ignition and separation of the shuttle's solid rocket boosters. STS-33 was the third night launch of the Space Shuttle program, and the first since shuttle flights resumed in 1988 following the Challenger disaster of 1986.

During the mission, Discovery deployed a single satellite, USA-48 (NSSDC ID 1989-090B). Experts believe that this was a secret Magnum ELINT (ELectronic INTtelligence) satellite headed for geosynchronous orbit, similar to that launched by STS-51-C in 1985, making this mission essentially a duplicate of that earlier mission.[4] According to Jim Slade of ABC News, the satellite was intended to eavesdrop on military and diplomatic communications from the Soviet Union, China, and other communist states. The satellite replaced the one launched by STS-51-C, which was running out of the maneuvering fuel required for keeping its station over the Indian Ocean.[5]

The satellite was deployed on the 7th orbit, and ignited its Inertial Upper Stage (IUS) booster at the ascending node of the 8th orbit, successfully placing it in a geosynchronous transfer orbit. This was the 8th IUS launched aboard the shuttle, and the seventh successfully deployed.

STS-33 was observed by the 1.6m telescope of the US Air Force Maui Optical Station (AMOS) during five passes over Hawaii. Spectrographic and infrared images of the shuttle obtained with the Enhanced Longwave Spectral Imager (ELSI) were aimed at studying the interactions between gases released by the shuttle's primary reaction control system and residual atmospheric oxygen and nitrogen species in orbit.[6][7]

The landing was initially scheduled for 26 November, but was postponed for a day because of strong winds at the landing site. Discovery landed at Edwards Air Force Base, California, on 27 November 1989 at 7:30 pm EST, after a mission duration of 5 days and 6 minutes.

A view of Discovery's tail from STS-33. 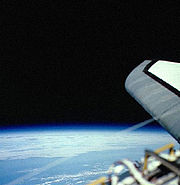 The shuttle's wing and Earth's horizon.

STS-33 Robbins Medallion.
Add a photo to this gallery

Retrieved from "https://nasa.fandom.com/wiki/STS-33?oldid=23264"
Community content is available under CC-BY-SA unless otherwise noted.