STS-34 was a NASA Space Shuttle mission using Atlantis. It was the 31st shuttle mission overall, and the fifth flight for Atlantis.[1] STS-34 launched from Kennedy Space Center, Florida, on 18 October 1989, and landed at Edwards Air Force Base, California, on 23 October. During the mission, the Jupiter-bound Galileo probe was deployed into space.

Atlantis lifted off from Pad B, Launch Complex 39, Kennedy Space Center (KSC), at 12:53 EDT on 18 October 1989. It carried the Jupiter-bound Galileo spacecraft in its cargo bay. The countdown was delayed at T-minus 5 minutes for 3 minutes and 40 seconds to update the onboard computer for a change in the Transoceanic Abort Landing (TAL) site. The TAL site was changed from Ben Guerir Air Base, Morocco, to Zaragoza Air Base, Spain, because of heavy rain at Ben Guerir.

The launch was originally targeted for 12 October 1989, the first day of a 41-day launch period during which the planets were properly aligned for a direct flight to Jupiter. The liftoff was rescheduled for 17 October 1989 to replace a faulty main engine controller for Space Shuttle Main Engine No. 2. It was postponed again until 18 October 1989 because of rain-showers within 20 miles (Template:Convert/round km) of Kennedy Space Center's Shuttle Landing Facility. The weather conditions were in violation of the launch commit criteria for a Return To Launch Site (RTLS) landing in the event of an aborted flight.

The primary payload, the Galileo spacecraft with its attached Inertial Upper Stage (IUS), was successfully deployed on its journey to Jupiter. STS-34 was only the second shuttle flight to deploy a planetary spacecraft, the first being STS-30, which deployed the Magellan spacecraft.

Several anomalies occurred during the flight, but none had a major impact on the mission. On 22 October 1989, an alarm woke the shuttle crew when the gas generator fuel pump system A heaters on Auxiliary Power Unit (APU) 2 failed to recycle at the upper limits of the system. There were also some minor problems with the Flash Evaporator System for cooling the orbiter, and the cryogenic oxygen manifold valve 2, which was left closed for the rest of the mission. A Hasselblad camera jammed twice, and a spare camera had to be used.

Chang Díaz described his second flight as much more "subdued". Demonstrators protested at launch time against the flight because it had a nuclear device on board to power the Galileo spacecraft. He also said they almost aborted the flight in orbit three times because of malfunctions, but continued because the alternative was to land with the nuclear device at an airport in Senegal, which could have caused an "international incident," according to the astronaut. He identified the deployment of Galileo as another tricky part of the mission as he only had a tight six-second opportunity to succeed.[3]

On 21 October 1989, Costa Rican President Dr. Oscar Arias Sanchez talked in Spanish with Chang-Diaz, a native of Costa Rica, and greeted the other crew members via a special telephone linkup. Arias told Chang-Diaz, "You raise high the name of Costa Rica and Latin America in general." Chang-Diaz also explained the mission's objectives in Spanish to Costa Rican listeners on the ground.[4]

Because of high winds predicted at the nominal landing time, the landing was moved two orbits earlier to 12:33 EDT on 23 October 1989. Atlantis landed on Runway 23 at Edwards Air Force Base, California, after a mission duration of 4 days, 23 hours and 40 minutes.

The mission's primary task was to deploy the Galileo spacecraft with its attached IUS booster. Deployment occurred on schedule at 19:15 EDT on 18 October, slightly more than six hours after launch, and the IUS successfully boosted Galileo toward Venus on the first leg of its six-year journey to Jupiter. The spacecraft was injected on a Venus transfer orbit at 20:20 EDT, and separated from the IUS 47 minutes later.

Galileo required a triple gravity assist – from Venus, Earth, and then Earth again – to propel it from the inner part of the solar system to Jupiter in the outer system. The trajectory made it possible to also observe asteroids 951 Gaspra and 243 Ida. Galileo had two major components: an orbiter which examined Jupiter and its four largest moons for eight years, and a probe which descended into the Jovian atmosphere to take direct samplings before being destroyed by the gas giant's heat and pressure.

Besides the Galileo spacecraft, Atlantis' payload bay held two canisters containing the Shuttle Solar Backscatter Ultraviolet (SSBUV) experiment. SSBUV, which made its first flight on STS-34, was developed by NASA to check the calibration of the ozone sounders on free-flying satellites, and to verify the accuracy of atmospheric ozone and solar irradiance data. The experiment operated successfully.

STS-34 carried a further five mid-deck experiments, all of which were deemed successful, including the Polymer Morphology (PM) experiment, sponsored by the 3M Company under a joint endeavor agreement with NASA. The PM experiment was designed to observe the melting and resolidifying of different types of polymers while in orbit. The Mesoscale Lightning Experiment, which had been flown on previous shuttle missions, observed the visual characteristics of large-scale lightning in the upper atmosphere.

The crew successfully troubleshooted a student experiment on ice crystal growth. The experiment's first activation did not produce crystals because the supercooled water formed an ice slag on the cooling plate. The crew turned the experiment off, allowing the ice to thaw, and then redispersed the liquid. Several crystals formed. On 22 October, Lucid and Baker completed the Growth Hormone Concentration and Distribution in Plants experiment by freezing samples of corn seedlings grown in orbit during the mission.

Chang-Diaz and Baker, a medical doctor, performed a detailed supplementary objective by photographing and videotaping the veins and arteries in the retinal wall of Baker's eyeball to provide detailed measurements which might give clues about a possible relationship between cranial pressure and motion sickness. Baker also tested the effectiveness of anti-motion sickness medication in space.

NASA began a tradition of playing music to astronauts during the Gemini program, and first used music to wake up a flight crew during Apollo 15. Each track is specially chosen, often by the astronauts' families, and usually has a special meaning to an individual member of the crew, or is applicable to their daily activities.[5] 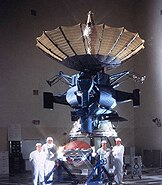 Galileo being prepared prior to launch.

The launch viewed from below.

Galileo prior to release. 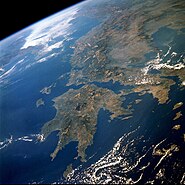 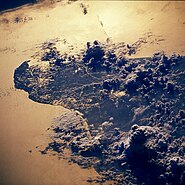 Atlantis lands at Edwards Air Force Base.
Add a photo to this gallery

Retrieved from "https://nasa.fandom.com/wiki/STS-34?oldid=23265"
Community content is available under CC-BY-SA unless otherwise noted.