Template:Infobox spaceflight STS-41-D was the 12th flight of NASA's Space Shuttle program, and the first mission of Space Shuttle Discovery. It was launched from Kennedy Space Center, Florida, on 30 August 1984, and landed at Edwards Air Force Base, California, on 5 September. Three commercial communications satellites were deployed into orbit during the six-day mission, and a number of scientific experiments were conducted.

The mission was delayed by more than two months from its original planned launch date, having experienced the Space Shuttle program's first launch abort at T-6 seconds on 26 June 1984.

The launch was originally planned for 25 June 1984, but because of a variety of technical problems, including rollback to the Vehicle Assembly Building to replace a faulty main engine, the launch was delayed by over two months. The 26 June launch attempt marked the first time since Gemini 6A that a manned spacecraft had experienced a shutdown of its engines just prior to launch.

During the 26 June launch attempt, there was a launch abort at T-6 seconds, followed by a pad fire about ten minutes later.[2][3]

"NTD we have a RSLS (Redundant Set Launch Sequencer) abort."

Mission Specialist Steve Hawley was reported as saying following the abort: "Gee, I thought we'd be a lot higher at MECO (Main Engine Cut-Off)!".[5] About ten minutes later, the following was heard on live TV coverage:

"We have indication two of our fire detectors on the zero level; no response. They're side by side right next to the engine area. The engineer requested that we turn on the heat shield fire water which is what could be seen spraying up in the vicinity of the engine engine bells of Discovery's three main engines."

While evacuating the shuttle, the crew was doused with water from the pad deluge system, which was activated due to a hydrogen fire on the launch pad caused by the free hydrogen (fuel) that had collected around the engine nozzles following the shutdown and engine anomaly.[6] Because the fire was invisible to humans, had the astronauts used the normal emergency escape procedure across the service arm to the slidewire escape baskets, they would have run into the fire.[7]

Changes to procedures resulting from the abort included more practicing of "safeing" the orbiter following aborts at various points, the use of the fire suppression system in all pad aborts, and the testing of the slidewire escape system with a real person (Charles F. Bolden, Jr.). It emerged that launch controllers were reluctant to order the crew to evacuate during the STS-41-D abort, as the slidewire had not been ridden by a human.[5]

Examination of telemetry data indicated that the engine malfunction had been caused by a stuck valve that prevented proper flow of LOX into the combustion chamber.

STS-41-D finally launched on 8:41 am EDT on 30 August after a six-minute, 50-second delay when a private aircraft flew into the restricted airspace near the launch pad. It was the fourth launch attempt for Discovery. Because of the two-month delay, the STS-41-F mission was cancelled (STS-41-E had already been cancelled), and its primary payloads were included on the STS-41-D flight. The combined cargo weighed over 41,184 pounds (Template:Convert/round kg), a record for a Space Shuttle payload up to that time.

Discovery's primary cargo consisted of three commercial communications satellites: SBS-D for Satellite Business Systems, Telstar 3C for Telesat of Canada, and Syncom IV-2, or Leasat-2, a Hughes-built satellite leased to the US Navy. Leasat-2 was the first large communications satellite designed specifically to be deployed from the Space Shuttle. All three satellites were deployed successfully and became operational.

The McDonnell Douglas-sponsored Continuous Flow Electrophoresis System (CFES) experiment, using living cells, was more elaborate than the one flown on previous missions, and payload specialist Walker operated it for more than 100 hours during the flight. A student experiment to study crystal growth in microgravity was also carried out. The highlights of the mission were filmed using an IMAX motion picture camera, and later appeared in the 1985 documentary film The Dream is Alive. Because of an obstruction in the shuttle's external wastewater dumping system, a two-foot "pee-sicle" formed during the mission; Hartsfield removed it with the Remote Manipulator System.[8]

The mission lasted six days, 56 minutes, and 4 seconds, with landing taking place on Runway 17 at Edwards Air Force Base at 6:37 am PDT on 5 September 1984. During STS-41-D, Discovery traveled a total of 2,490,000 miles (Template:Convert/round km) and made 97 orbits. The orbiter was transported back to KSC on 10 September. Ominously, STS-41-D was the first Shuttle mission in which blow-by damage to the SRB O-rings was discovered.

The 12 stars within the blue field indicate the flight's original numerical designation as STS-12 in the Space Transportation System's mission sequence. A representation of Discovery's namesake is manifested in a sailing ship, which is linked to the Shuttle (with the OAST solar array in the payload bay) via a red, white, and blue path, signifying its maiden voyage.

NASA began a tradition of playing music to astronauts during the Gemini program, and first used music to wake up a flight crew during Apollo 15. Each track is specially chosen, often by the astronauts' families, and usually has a special meaning to an individual member of the crew, or is applicable to their daily activities.[9] 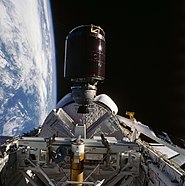 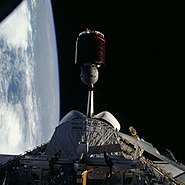 Retrieved from "https://nasa.fandom.com/wiki/STS-41-D?oldid=23275"
Community content is available under CC-BY-SA unless otherwise noted.