STS-51-A marked the first time a shuttle deployed two communications satellites, and retrieved from orbit two other communications satellites. The Canadian Anik D2 and Syncom IV-1 satellites were both successfully deployed by the crew of Discovery. Palapa B2 and Westar 6, meanwhile, had been deployed during the STS-41-B mission earlier in the year, but had been placed into improper orbits due to the malfunctioning of their kick motors; they were both safely recovered and returned to Earth during STS-51-A.

STS-51-A was launched from Florida's Kennedy Space Center (KSC) at 7:15 am EST, November 8, 1984, less than a month after the STS-41-G flight. A launch attempt the day before was scrubbed at T-minus 20 minutes due to high shear winds in the upper atmosphere.

The two communications satellites successfully deployed were Anik D2 (on the second day of the mission) and Syncom IV-1, also known as Leasat 1 (on the third day).

The orbiter then began a series of maneuvers to meet up with the first of the two satellites to be recovered, Palapa B2. The orbits of both satellites had been lowered by ground commands from about 600 miles (Template:Convert/round km) to 210 miles (Template:Convert/round km) to facilitate recovery operations. On day five of the mission, Discovery rendezvoused with Palapa. Mission specialists Allen and Gardner performed an EVA, capturing the satellite with a device known as a "Stinger," which was inserted into the satellite's apogee motor nozzle by Allen. The satellite's rotation was slowed to 1 RPM, and Gardner, operating from a position on the end of the RMS, attempted unsuccessfully to grapple the satellite. Allen was able to manually maneuver the satellite into its cradle with Gardner's help, further aided by the RMS, which was operated by Fisher. The successful, improvised rescue effort took two hours.

The recovery of Westar 6 was not as difficult, and took place a day later. This time, Gardner, using the same muscle-power technique Allen had used for Palapa B2's rescue, easily captured the satellite. With Allen's help, he placed it in a cradle in the cargo bay. Following Westar 6's recovery, Gardner humorously held up a "For Sale" sign, as if trying to find someone to sell the malfunctioning satellites to. The Westar satellite was indeed later sold to Hong Kong-based AsiaSat.

The STS-51-A mission also carried the Diffused Mixing of Organic Solutions (DMOS) experiment. It was the first of a series of comprehensive organic and polymer science experiments sponsored by 3M Corporation. This mid-deck experiment was successful, and the proprietary results of the chemical mixes were turned over to 3M. One other experiment, a radiation-monitoring experiment, was also performed.

The satellite recoveries on STS-51-A were the last untethered spacewalks until 1994, and marked the last use of the Manned Maneuvering Unit. In 1994, the Simplified Aid For EVA Rescue (SAFER) was tested on STS-64. On all subsequent spacewalks conducted by both NASA and the Soviet/Russian space agencies, the astronauts were tethered to the craft by some means.

The second mission of Discovery ended at 7 am EST on November 16, 1984 with a successful landing on Runway 15 at KSC. Footage of the landing was used in the 1985 IMAX movie The Dream is Alive. The flight completed 126 orbits, and lasted 7 days, 23 hours and 45 minutes. It was the third shuttle landing at KSC, and the fifth and last shuttle mission of 1984.

NASA began a tradition of playing music to astronauts during the Gemini program, and first used music to wake up a flight crew during Apollo 15. Each track is specially chosen, often by the astronauts' families, and usually has a special meaning to an individual member of the crew, or is applicable to their daily activities.[2] 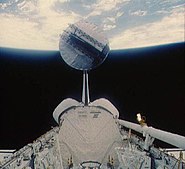 Palapa B2 is loaded into the payload bay.
Add a photo to this gallery

Retrieved from "https://nasa.fandom.com/wiki/STS-51-A?oldid=18811"
Community content is available under CC-BY-SA unless otherwise noted.