Template:Infobox spaceflight STS-51-G was the eighteenth flight of NASA's Space Shuttle program, and the fifth flight of Space Shuttle Discovery. The seven-day mission launched from Kennedy Space Center, Florida, on June 17, 1985, and landed at Edwards Air Force Base, California, on June 24. Sultan Salman Al Saud of Saudi Arabia was on board as a payload specialist; Al Saud became the first Arab, the first Muslim, and the first member of a royal family to fly into space.[1] It was also the first Space Shuttle mission which flew without at least one astronaut from the pre-Shuttle era among its crew.

Also carried was the Spartan 1 carrier module, designed to be deployed from the orbiter and fly free in space before being retrieved. Spartan 1 included Template:Convert/round kilograms (300 lb) of astronomy experiments. It was deployed and operated successfully, independent of the orbiter, before being retrieved. Discovery furthermore carried an experimental materials-processing furnace, several French biomedical experiments, and six Getaway Special experiments, which were all successfully performed, although the GO34 Getaway Special shut down prematurely.

The mission's final payload element was a High Precision Tracking Experiment (HPTE) for the Strategic Defense Initiative (nicknamed "Star Wars"); the HPTE failed to deploy properly during its first try on the mission's 37th orbit, because the orbiter was not at the correct attitude. It was successfully deployed on orbit 64. 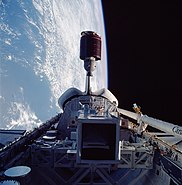 Spartan 1 after deployment
Add a photo to this gallery

Retrieved from "https://nasa.fandom.com/wiki/STS-51-G?oldid=23286"
Community content is available under CC-BY-SA unless otherwise noted.