STS-51-I was the 20th mission of NASA's Space Shuttle program and the sixth flight of Space Shuttle Discovery. During the mission, Discovery deployed three communications satellites into orbit. The mission launched from Kennedy Space Center, Florida, on August 27, 1985, and landed at Edwards Air Force Base, California, on September 3.

Discovery launched at 6:58 am EDT on August 27, 1985. Two earlier launch attempts, one on August 24 and another on August 25, were scrubbed – the first because of poor weather, and the second because the backup orbiter computer failed and had to be replaced. The successful launch on August 27 took place just as an approaching storm front reached the launch pad area.

The three communications satellites were Aussat 1, a multi-purpose spacecraft owned by Australia; ASC-1, owned and operated by the American Satellite Company; and Syncom IV-4, leased to the Department of Defense by its builder, Hughes Co. Both Aussat 1 and ASC-1 were deployed on the day of the launch, 27 August. Syncom IV-4 was deployed two days later. All three achieved their planned geosynchronous orbits and became operational.

On the fifth day of the mission, astronauts Fisher and van Hoften began repair efforts on the malfunctioning Syncom IV-3, following a successful rendezvous maneuver by Discovery. The effort was slowed by a problem in the Remote Manipulator System elbow joint. After a second EVA by Fisher and van Hoften, the satellite's control lever was repaired, permitting commands from the ground to activate the spacecraft's systems and eventually send it into its proper geosynchronous orbit. The two EVAs lasted a total of 11 hours and 46 minutes. 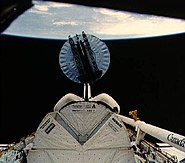 Deployment of Syncom IV-4
Add a photo to this gallery

Retrieved from "https://nasa.fandom.com/wiki/STS-51-I?oldid=23287"
Community content is available under CC-BY-SA unless otherwise noted.