Template:Infobox spaceflight STS-7 was NASA's seventh Space Shuttle mission, and the second mission for the Space Shuttle Challenger. During the mission, Challenger deployed several satellites into orbit. The shuttle launched from Kennedy Space Center on June 18, 1983, and landed at Edwards Air Force Base on June 24. STS-7 was notable for carrying Sally Ride, America's first female astronaut.

STS-7 began on June 18, 1983, with an on-time liftoff at 7:33 am EDT. It was the first spaceflight of an American woman (Sally K. Ride), the largest crew to fly in a single spacecraft up to that time (five people), and the first flight that included members of NASA's Group 8 astronaut class, which had been selected in 1978 to fly the Space Shuttle.

Two communications satellites – Anik C2 for Telesat of Canada, and Palapa B1 for Indonesia – were successfully deployed during the first two days of the mission. The mission also carried the first Shuttle Pallet Satellite, SPAS-1, which was built by the West German aerospace firm Messerschmitt-Bolkow-Blohm. SPAS-1 was unique in that it was designed to operate in the payload bay or be deployed by the RMS as a free-flying satellite. It carried 10 experiments to study formation of metal alloys in microgravity, the operation of heat pipes, instruments for remote sensing observations, and a mass spectrometer to identify various gases in the payload bay. It was deployed by the RMS and flew alongside and over Challenger for several hours, performing various maneuvers, while a U.S.-supplied camera mounted on SPAS-1 took pictures of the orbiter. The RMS later grappled the pallet and returned it to the payload bay.

STS-7 also carried seven GAS canisters, which contained a wide variety of experiments, as well as the OSTA-2 payload, a joint U.S.-West German scientific pallet payload. Finally, the orbiter's Ku-band antenna was able to relay data through the Tracking and Data Relay Satellite to a ground terminal for the first time.

STS-7 was scheduled to make the first Shuttle landing at Kennedy Space Center's then-new Shuttle Landing Facility. However, unacceptable weather forced a change to Runway 15 at Edwards AFB. The landing took place on June 24, 1983, at 6:57 am PDT. The mission lasted 6 days, 2 hours, 23 minutes, and 59 seconds, and covered about 2.2 million miles during 97 orbits of the Earth. Challenger was returned to KSC on June 29.

While Challenger was on-orbit, one of its windows was damaged non-critically by space debris.[2]

The seven white stars in the black field of the mission patch, as well as the arm extending from the shuttle in the shape of a 7, indicate the flight's numerical designation in the Space Transportation System's mission sequence. The five-armed symbol on the right side illustrates the four male/one female crew.

The second launch of Challenger

Deployment of Palapa B1 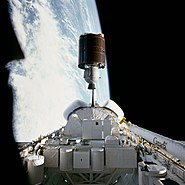 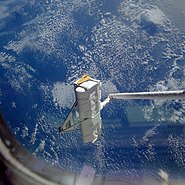 Retrieved from "https://nasa.fandom.com/wiki/STS-7?oldid=23297"
Community content is available under CC-BY-SA unless otherwise noted.