Template:Infobox spaceflight STS-70 was the 21st flight of the Space Shuttle Discovery, and the last of 7 shuttle missions to carry a Tracking and Data Relay Satellite (TDRS). This was the first shuttle mission controlled from the new mission control center room at the Johnson Space Center in Houston.[1] STS-70 was also the first flight of the new Block 1 orbiter main engine, designed to improve both engine performance and safety. The mission was launched from Kennedy Space Center in Florida on 13 July 1995, only six days after the landing of sister ship Atlantis, marking the fastest turnaround between flights in the history of the program.

STS-70 had originally moved ahead of STS-71 because of a delay in the launch of the Russian Spektr laboratory module to the Russian space station Mir. However, on 31 May 1995 shuttle managers assessed damage to the External Tank of STS-70 caused by nesting flicker woodpeckers. The damage consisted of about 71 holes (ranging in size from 4 inches in diameter to 1/2 inch in diameter) in the ETs thermal protection foam insulation. Technicians installed safeguards against additional damage. On 2 June, NASA managers decided to delay the launch of Discovery in order to make repairs to the insulation, and STS-71 was moved ahead of STS-70. Discovery was rolled back to the VAB on 8 June, and was returned to the pad on 15 June. Launch occurred 13 July 1995 at 9:41:55.078 a.m. EDT. The launch window was 2 hours 30 min. The hatch was closed at 8:13am EDT and the count proceeded smoothly until T-31 sec. The count was held for 55 seconds at T-31 sec by the Booster Range Safety Engineer (CBRS) Tod Gracom at the LCC C-5 Console due to fluctuations seen on the external tank automatic gain control (AGC) ET range safety system receiver . Launch Commit Criteria contigency procedures were worked and the count then proceeded on schedule. STS-70 marked the maiden flight of the new Block 1 orbiter main engine. Engine number 2036 featured the new high-pressure liquid oxygen turbopump, a two-duct powerhead, baffleless main injector, single-coil heat exchanger and start sequence modifications. The Block I engine flew in the number one position on Discovery. The other two engines were of the existing Phase II design.

The primary mission was the launch and deployment of the 7th Tracking and Data Relay Satellite (TDRS) by means of the two-stage Inertial Upper Stage (IUS) solid rocket. It was built by TRW and weighs about 2,200 kilograms (Template:Convert/round lb). The satellite was ejected from Discovery's cargo bay exactly on time at 2:55 p.m. CDT, approximately six hours into the flight. The release of the satellite was overseen by Mission Specialists Don Thomas and Mary Ellen Weber. About 15 minutes later, Discovery's Commander Tom Henricks fired the shuttle's engines to raise the orbit and move away from the vicinity of the satellite and the IUS.[2] At about 3:55 p.m., the IUS fired the first of two burns that would put TDRS-G into its proper, 22,000-mile-high geostationary orbit above the central Pacific Ocean at 178 degrees West longitude. The deployment operations utilized 3 separate control centers; the White Sands ground station controlled the TDRS, the JSC Mission Control Center (MCC) controlled the shuttle, and the Inertial Upper Stage (IUS) control center at Onizuka Air Force Base in Sunnyvale California controlled the booster stage. Once it reached its destination, the fully deployed satellite had a wingspan of 57 ft. The TDRS was the sixth placed in operational use. The first TDRS was launched aboard STS-6 on 1983-04-04 with a scheduled lifetime of seven years. The second satellite, TDRS-B was lost aboard Challenger on mission STS-51-L. TDRS-3 was deployed from STS-26, TDRS-4 from STS-29, TDRS-5 from STS-43 and TDRS-6 was deployed by STS-54. The on-orbit TDRS network was rearranged and included two fully operational spacecraft occupying the TDRS East and West slots, one on-orbit fully functional spare, TDRS-1, which was nearly depleted having exceeded its planned lifetime, and the partially operational TDRS-3 spacecraft dedicated to supporting the Compton Gamma Ray Observatory and providing coverage an area that can't be seen by the other satellites known as the Zone of Exclusion.

The Bioreactor Demonstration System was designed to use ground-based and space-bioreactor systems to grow individual cells into organized tissue that is morphologically and functionally similar to the original tissue or organ. The BDS was composed of a device developed at the Johnson Space Center that used a rotating cylinder to suspend cells and tissues in a growth medium, simulating some aspects of microgravity. The system, which was already used extensively in ground-based research, also provided for gas and nutrient exchange. The purpose of the flight experiment was to demonstrate the performance of the bioreactor in actual mircrogravity. As such, the primary goal was to assess the fluid dynamic characteristics of the bioreactor in microgravity.[3]

Landing opportunities at The Kennedy Space Center at 7:54 am EDT and 9:31 am 21 July 1995 were waved off due to a buildup of ground fog over the Shuttle Landing Facility. Flight Director Rich Jackson directed the five STS-70 astronauts to remain aloft for another day after poor visibility prevented Discovery's homecoming on the two consecutive landing opportunities. Discovery's astronauts were informed that their landing had been waved off for the day at 7:10 AM CDT after astronaut Steve Oswald, flying weather reconnaissance in a Shuttle Training Aircraft over the landing strip, reported that he could not see the 3-mile-long runway from his vantage point. STS-70 landed at the Kennedy Space Center on 22 July 1995 at 8:02 a.m. EDT on Runway 33. Nose gear touchdown occurred at 8:02:11 am EDT (Mission Elapsed Time of 8 days 22 hours 20 min and 16 sec) with wheels stop at 8:02:57 am (MET of 8 days 22 hr 21 min and 2 sec). An earlier KSC landing opportunity at 6:26 am EDT was waved off due to marginal yet improving weather conditions at KSC.[4]

Discovery being lowered into position to be mated with its External Fuel tank.

Space Shuttle Discovery STS-70 Launch. Taken with one of the first digital cameras: a Nikon E2.

Moonrise viewed from the orbiter. 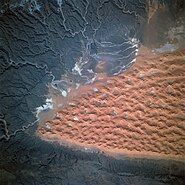 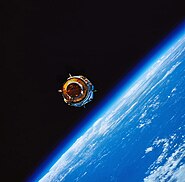 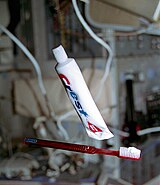 Toothbrush and tube of toothpaste floating in microgravity.
Add a photo to this gallery

Retrieved from "https://nasa.fandom.com/wiki/STS-70?oldid=18849"
Community content is available under CC-BY-SA unless otherwise noted.