STS-72, the 74th flight of the Space Shuttle program and the 10th of the orbiter Endeavour was launched at 4:41AM EST January 11, 1996 after a brief delay due to communication issues. The nighttime launch window was in support of the mission's primary objective, the capture and return to Earth of a Japanese microgravity research spacecraft known as Space Flyer Unit (SFU). The 3,577 kilograms (Template:Convert/round lb) SFU was launched by Japan's National Space Development Agency (NASDA) from Tanegashima Space Center in Japan on 18 March 1995 aboard a Japanese H-II rocket (HII-3), and spent ten months in orbit conducting automated research in materials science, biology, engineering, and astronomy. Mission Specialist Koichi Wakata operated the orbiter's remote manipulator system arm on flight day three to pluck SFU from orbit. Both of the satellites's solar arrays had to be jettisoned prior to retrieval when sensors indicated improper latching following their retraction. This jettison procedure had been incorporated in preflight training as a contingency in the event of such an occurrence. The canisters housing the arrays were jettisoned 12 minutes apart as Endeavour and the SFU traveled across Africa on the thirtieth orbit of the mission. The contingency procedure delayed the capture of the satellite by about an hour and half. Once in Endeavour's payload bay, the satellite's internal batteries were bypassed following connection of a remotely operated electrical cable to the side of the satellite.[1]

Two 6.5 hour spacewalks were conducted by three astronauts to test hardware and tools to be used in the assembly of the International Space Station starting in late 1998. EVA-1 on flight day five consisted of Crewmembers Leroy Chiao (EV1) and Dan Barry (EV2). After taking a few minutes to acclimate themselves in the payload bay, first-time spacewalkers Chiao and Barry attached a portable work platform to the end of the robot arm, operated by Pilot Brent Jett and Mission Specialist Koichi Wakata. Jett used the arm to grapple various pieces of hardware designed to hold large modular components, mimicking the way equipment boxes and avionics gear will be moved back and forth in assembling the Space Station. Chiao and Barry unfolded a cable tray diagonally across the forward portion of the cargo bay housing simulated electrical and fluid lines similar to those which would later connect modules and nodes of the Space Station. The rigid umbilical, as it is known, was tested for its ease of handling and the ability of the astronauts to hook up the lines to connectors on the side of Endeavour's bay. While Chiao unraveled various lengths of cable from a caddy device, Barry spent time practicing the hookup of the various cables in the rigid umbilical to connectors in the bay, testing his ability to manipulate tiny bolts and screws in weightlessness. He reported that most tasks could be accomplished with little difficulty. Barry and Chiao then traded places, as Barry mounted the portable work platform to evaluate its worth. The first EVA lasted 6 hours, 9 minutes.[3] EVA-2 on Flight Day 7 consisted of Leroy Chiao (EV1) and Winston Scott (EV2), lasting 6 hours, 53 minutes. Chiao and Scott worked with utility boxes, slidewires and a portable work stanchion affixed to Endeavour's robot arm to gather additional data on methods and procedures which would be incorporated in the techniques used to assemble the International Space Station. Late in the spacewalk, Scott climbed into foot restraints on the OAST-Flyer satellite platform for a thermal evaluation exercise. Endeavour was maneuvered to the coldest position possible, with its payload bay facing out toward deep space and allowing temperatures to dip to about 104 degrees below zero at the point where Scott was positioned to test the ability of his spacesuit to repel the bitter cold temperature of space.[4]

The crew of STS-72 and their families were followed by a camera crew from PBS from the day they were assigned to the flight and then through their training and, finally, the mission itself. The result was a 90-minute documentary narrated by Bill Nye titled 'Astronauts' which first aired on PBS on 17 July 1997 and was later released on VHS home video.

Endeavour on Pad 39B.

Spartan visible out the windows. 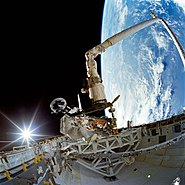 Space Shuttle Endeavour landing after a successful flight.
Add a photo to this gallery

Retrieved from "https://nasa.fandom.com/wiki/STS-72?oldid=23298"
Community content is available under CC-BY-SA unless otherwise noted.