STS-88 was the first Space Shuttle mission to the International Space Station (ISS). It was flown by Space Shuttle Endeavour, and took the first American module, the Unity node, to the station.[1]

The seven-day mission was highlighted by the mating of the U.S.-built Unity node to the Functional Cargo Block (Zarya module) already in orbit, and three spacewalks to connect power and data transmission cables between the Node and the FCB. Zarya, built by Boeing and the Russian Space Agency, was launched on a Russian Proton rocket from the Baikonur Cosmodrome in Kazakhstan in November 1998.[2]

Node 1, named Unity, was the first space station hardware delivered by the space shuttle. It has two Pressurized Mating Adapters (PMA), one attached to either end. One PMA is permanently mated to Zarya, and the other is used for orbiter dockings and crew access to the station. Unity also contains an International Standard Payload Rack used to support on-orbit activities, which was activated after the fifth Shuttle/Station assembly flight.[2]

To begin the assembly sequence, the crew conducted a series of rendezvous maneuvers similar to those conducted on other Shuttle missions to reach the orbiting FGB. On the way, Currie used the Shuttle's robot arm to place Node 1 atop the Orbiter Docking System.[4][5] Cabana completed the rendezvous by flying Endeavour to within 10 metres (Template:Convert/round ft) of the FGB, allowing Currie to capture the FGB with the robot arm and place it on the Node's Pressurized Mating Adapter.[6]

Once the two elements were docked, Ross and Newman conducted two scheduled spacewalks to connect power and data cables between the Node, PMAs and the FGB.[7] The day following the spacewalks, Endeavour undocked from the two components, completing the first Space Station assembly mission.[8][9]

Endeavour's astronauts toured the new International Space Station on 11 December 1998, entering the Unity and Zarya modules for the first time, and establishing an S-band communications system that enables U.S. flight controllers to monitor the outpost's systems.[10][11] Reflecting the international cooperation involved in building the largest space complex in history, Commander Robert Cabana and Russian Cosmonaut Sergei Krikalev opened the hatch to the U.S.-built Unity connecting module and floated into the new station together.[11]

The rest of the crew followed and began turning on lights and unstowing gear in the roomy hub to which other modules would be connected in the future. Each passageway within Unity was marked by a sign leading the way into tunnels to which new modules would later be connected.[11]

About an hour later, Robert Cabana and Sergei Krikalev opened the hatch to the Russian-built Zarya control module, which was the nerve center for the station in its embryonic stage. Joined by Pilot Frederick Sturckow and Mission Specialists Jerry Ross, James H. Newman and Nancy Currie, Cabana and Krikalev hailed the historic entrance into the International Space Station and said the hatch opening signified the start of a new era in space exploration.[11]

Ross and Newman went right to work in Unity, completing the assembly of an early S-band communications system that allows flight controllers in Houston to send commands to Unity's systems and to keep tabs on the health of the station with a more extensive communications capability than exists through Russian ground stations.[11] The astronauts also conducted a successful test of the videoconferencing capability of the early communications system, which was used by the first crew to permanently occupy the station in November 2000 (Expedition 1). Newman downlinked greetings to controllers in the station flight control room in Houston and to astronaut Bill Shepherd, who commanded the first crew and lived aboard the station with Krikalev and Cosmonaut Yuri Gidzenko.[citation needed]

Krikalev and Currie replaced a faulty unit in Zarya which controlled the discharging of stored energy from one of the module's six batteries. The battery had not been working properly in its automatic configuration, but the new unit was functioning normally shortly after it was installed.[citation needed]

The astronauts also unstowed hardware and logistical supplies stored behind panels in Zarya, relocating the items for use by the Shuttle crew that was to visit the station in May 1999 and by Shepherd's expedition crew. The astronauts also completed their initial outfitting of the station.[citation needed]

The hatches to Zarya and Unity were closed before Endeavour undocked from the new station, leaving the new complex to orbit the Earth unpiloted.[12]

Space Shuttle Endeavour launched at 3:35:34 am EST from the Kennedy Space Center’s Launch Pad 39A. STS-88 was the first shuttle flight to the International Space Station. After launch, the crew opened the shuttle’s payload bay doors, deployed the Ku-Band antenna, and activated the shuttle’s Hitchhiker payload. The crew also started preparing for the multiple engine firings that will be performed to bring shuttle Endeavour within the Shuttle Remote Manipulator System’s reach of the Zarya FGB. At launch, Zarya was 240 statute miles above the Kennedy Space Center (KSC), and the module was on its 222nd orbit of the Earth since its launch.[17]

On Flight Day 2, the crew of shuttle Endeavour performed several tasks to get ready for the docking on Sunday and the extra-vehicular activities (EVA) to be completed on the mission. Nancy Currie conducted a photo survey of Unity and Endeavour’s payload bay, using the shuttle’s robotic arm, Canadarm. Jerry Ross and Jim Newman checked out the spacesuits they would use on the three EVAs and prepared the shuttle’s airlock for use during the spacewalks. Rick Sturckow, who would be choreographing the EVAs from inside the shuttle, joined Ross and Newman to check out the SAFER units to be worn during the spacewalks in case Ross or Newman were to become separated from Endeavour during one of the spacewalks.[18]

On Flight Day 3, Currie used Canadarm to grapple and place Unity onto the Orbiter Docking System at 6:45 pm EST. The crew pressurized PMA-2 and entered it. They put several caps over vent valves to prepare for the entrance into Unity later in the week. Commander Bob Cabana performed a debris avoidance maneuver to move Endeavour out of the way of a casing from a Delta II rocket that launched on 6 November from Vandenberg Air Force Base in California.[4]

At 3:33 pm EST, Mission Specialists Jerry Ross and Jim Newman commenced on a 7-hour, 2 minute EVA to continue the installation of Unity. The two spacewalkers first installed two antennas on the outside of Unity. The astronauts also removed launch restraint pins on the four radial common berthing mechanisms of Unity. They installed covers on Unity’s two data relay boxes to protect them from sunlight. Lastly, Newman freed a backup rendezvous system antenna on the Zarya FGB.[21]

Flight Day 8 was a historic day as the International Space Station was opened for the first time on orbit. At 2:54 pm EST, Commander Bob Cabana and Russian Cosmonaut Sergei Krikalev opened the hatch to the Unity Node of the new International Space Station. The other members of the crew started unstowing gear and turning on the lights. At 4:12 pm EST, Cabana and Krikalev opened the hatch into Zarya. Jerry Ross and Jim Newman assembled a S-band communications system in Unity, and Krikalev and Nancy Currie replaced a problematic battery discharging unit in Zarya.[10]

On Flight Day 9, Pilot Rick Sturckow and Mission Specialist Nancy Currie continued unstowing hardware in Unity. After turning off the lights, the crew later closed the hatches to Zarya and Unity. The crew prepared for the mission’s third and final spacewalk on Flight Day 10. Endeavour’s crew also conducted interviews with CNN and CBS News.[22]

At 3:33 pm EST, astronauts Jerry Ross and Jim Newman commenced on a 6-hour, 59 minute EVA to finish the installation of the Unity Node to Zarya. The two stowed tools on the side of Unity to prepare for the spacewalks on STS-96, the next mission to the ISS. Ross also freed another antenna on Zarya, similar to the one Newman freed on EVA-2. The spacewalkers also tested the redesigned SAFER jet packs, to be used in the event an astronaut became separated from the spacecraft during a spacewalk. After the EVA, Pilot Rick Sturckow depressurized the vestibule between Endeavour and PMA-2 to prepare for the undocking of the two spacecraft on Flight Day 11.[23]

On Flight Day 11, Space Shuttle Endeavour undocked from the International Space Station. At 3:25 pm EST, Pilot Rick Sturckow backed Endeavour 450 feet (Template:Convert/round m) away from the station and started a nose-forward fly-around of the station, so that Endeavour’s crew could take pictures of the space station. At 4:49 pm EST, Sturckow performed a final separation burn. Later, the crew deployed SAC-A, a small satellite for the Argentinean National Commission of Space Activities.[24]

Flight Day 13 was landing day for Space Shuttle Endeavour and its crew of six. At 7:07 pm EST, Endeavour’s payload bay doors were closed for entry. Flight Director John Shannon gave the go for Endeavour’s crew to fire the orbital maneuvering system engines for the deorbit burn at 9:46 pm EST so that Endeavour could slow down to enter the Earth’s atmosphere. At 10:54 pm EST, Endeavour and crew landed on the Kennedy Space Center’s Runway 15. Endeavour wrapped up a 4.7 million mile mission, and the first to the International Space Station.[26] 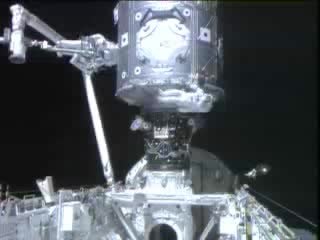 Retrieved from "https://nasa.fandom.com/wiki/STS-88?oldid=23302"
Community content is available under CC-BY-SA unless otherwise noted.