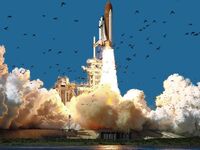 Space Shuttle Challenger (NASA Orbiter Vehicle Designation: OV-099) was NASA's second Space Shuttle orbiter to be put into service, Columbia being the first. Its maiden flight was on April 4, 1983, and it completed nine missions before breaking apart 73 seconds after the launch of its tenth mission, STS-51-L on January 28, 1986, resulting in the death of all seven crew members. (For more on the Challenger disaster, see Space Shuttle Challenger disaster.) The accident led to a two-and-a-half year grounding of the shuttle fleet, with missions resuming in 1988 with the launch of OV-103 on STS-26. Challenger herself was replaced by the OV-105 , which first launched in 1992.

Challenger was named after HMS Challenger a British corvette which carried out a Challenger expedition global marine research expedition in the 1870s.

The shuttle was constructed by using a body frame (STA- 099) that had initially been built as a test article. STA-099 was not originally intended for spaceflight, but NASA found that recycling it would be less expensive than refitting the prototype orbiter Enterprise (OV-101) to be spaceworthy, as originally planned.

Challenger (and the orbiters built after it) had fewer tiles in its Thermal Protection System than Columbia. Most of the tiles on the payload bay doors, upper wing surface and rear fuselage surface were replaced with DuPont white nomex felt insulation. This modification allowed Challenger to carry 2,500 lb (1,100 kg) more payload than Columbia. Challenger was also the first orbiter to have a head-up display system for use in the descent phase of a mission.

After its first flight, Challenger quickly became the workhorse of NASA's Space Shuttle fleet, flying far more missions per year than Columbia. In 1983 and 1984, Challenger flew on 85% of all Space Shuttle. Even when the orbiters Space Shuttle Discovery and Space Shuttle Atlantis joined the fleet, Challenger remained in heavy use with three missions a year from 1983-85. Challenger, along with Discovery, was modified at John F. Kennedy Space Center to be able to carry the Centaur (rocket) upper-stage in its payload bay. Had STS-51-L been successful, Challenger's next mission would have been the deployment of the Ulysses probe with the Centaur to study the polar regions of the Sun.

Challenger's many spaceflight accomplishments included the first American woman, African-American, and Canadian in space, three Spacelab missions, and the first night launch and landing of a Space Shuttle. Challenger was also the first space shuttle to be destroyed in an accident during a mission. The collected debris of the vessel are currently stored in decommissioned missile silos at Cape Canaveral Air Force Station. From time to time, further pieces of debris from the orbiter wash up on the Florida coast. When this happens, they are collected and transported to the silos for storage. Because of her early loss, Challenger was the only space shuttle that never wore the NASA logo.

Retrieved from "https://nasa.fandom.com/wiki/Space_Shuttle_Challenger-Mobile?oldid=15669"
Community content is available under CC-BY-SA unless otherwise noted.