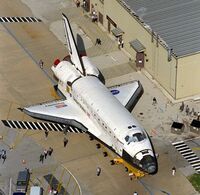 Space Shuttle Discovery OV-103 is one of the three currently operational orbiters in the Space Shuttle fleet of NASA, the space agency of the United States.(The other two are Atlantis and Endeavour.) When first flown in 1984, Discovery became the third operational orbiter, and is now the oldest orbiter in service. Discovery has performed both research and International Space Station (ISS) assembly missions.

"Discovery" is currently in storage after it completed its last mission, STS-133 in 2011. It is now retired and on display. After STS-135, all the remaining shuttles became on display.

The spacecraft takes its name from previous ships of exploration named Discovery, primarily HMS Discovery, the sailing ship that accompanied famous explorer James Cook on his third and final major voyage. Others include Henry Hudson's ship Discovery which he used in 1610–1611 to search for a Northwest Passage, and RRS Discovery, a vessel used for expeditions to Antarctica in 1901-1904 by Robert Falcon Scott and Ernest Shackleton (and still preserved as a museum). The shuttle shares a name with Discovery One, the fictional Jupiter spaceship from the films 2001: A Space Odyssey.

Discovery was the shuttle that launched the Hubble Space Telescope. The second and third Hubble service missions were also conducted by Discovery. She has also launched the Ulysses probe and three TDRS satellites. Discovery has been chosen twice as the return to flight orbiter, first in 1988 as the return to flight orbiter after the Challenger disaster, and then for the twin return to flight missions in July 2005 and July 2006 after the 2003 Columbia disaster. Discovery also carried Project Mercury astronaut John Glenn, who was 77 at the time, back into space during STS-95 on October 29, 1998, making him the oldest human being to venture into space.

Had the planned missions from Vandenberg Air Force Base for the United States Department of Defense gone ahead, Discovery would have flown these missions.

Retrieved from "https://nasa.fandom.com/wiki/Space_Shuttle_Discovery?oldid=18264"
Community content is available under CC-BY-SA unless otherwise noted.